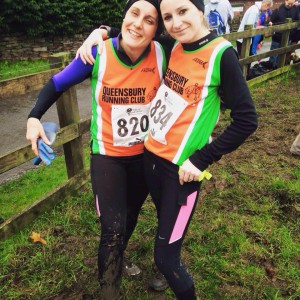 A club record of 31 runners turned out for the 1st race in the West Yorkshire Cross Country League on Sunday 13th December. The first fixture at Stainland was postponed due to torrential rain in the days before and the skies opened again on the day before the Dewsbury race. The course was very muddy with some tough climbs and tricky descents. Congratulations to everyone who took part. Many runners were participating in the WYWL for the first time. The support for everyone was fantastic with many of those who had already crossed the line stayed on to cheer on the rest of the team as they rushed for the line.

First home for QRC was Tom Collinge in 9th. Tom comfortably in 4th place at the end of the final climb but he took a wrong turn in the woods and slipped a few places. It was still a fine run Tom! The male vets competed amongst themselves for the next QRC places. Mick Coe timed his move to perfection and just edged past Martin Firth and Peter Hughes. Jo Horan was the first female home for Queensbury coming home in 10th place. Anna Smith crossed the line soon after and Stacey Cleal came in in 23rd place.

The outstanding team performance on the day was the Female team (4th overall). The Male team was 6th, the Vets team 7th and the overall position at the end of the first race is 5th. There is much to look forward to at the second race in Idle on January 3rd.

The quality of the Queensbury veteran runners was again evident with four absolutely fantastic age-category wins (Anna Smith, Martin Firth, Peter Hughes and Graham Jowett). Jo Horan and Stacey Cleal were 3rd and 4th in their respective categories and Mick Coe was 5th in the exceptional M50 group.

Well done to all. A real credit to Queensbury Running Club and living proof of the great strides the club has made in the last year.