A classic late season long race that follows a 27k figure-of-8 course around the remoter reaches of Pendle Hill, with total climbing of just short of 5000ft. After a first visit to the trig, there’s a long fast descent of the length of Pendle to the,Nick’ and then Churn Clough. A steep climb up Spence Moor is followed by the notorious,Geronimo’ descent into Ogden Valley. After regaining the plateau and retracing your footsteps towards the,Nick’, you are faced with three major climbs, each one steeper and longer than the last, before a second pass of the Trig and a long run off back to Barley. From Barley Village Hall.

For some unknown reason Gary Rowling and Chris King took on the challenge and both had god runs over the tough course and distance. 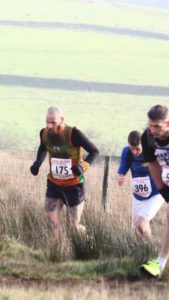