This will be the first in an occasional series which will look at how some of our members got into running. The first interview is with Bev Morritt – who will be giving the Gary Morritt award on Friday 22nd at our annual awards night.

JS – So, Bev, when and how did you start running? 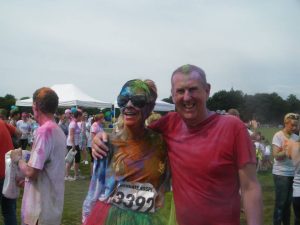 That would be about 2010. I just wasn’t sporty at school. You know every class has that brainy, fat lass, who’s a bit gormless? Does well in exams but would you pick her for a sports team? That was me.  Anyway, I got to about 44 and Matthew, my son, was doing karate at the time. While the kids were training I’d sit with some of the parents, we’d get talking and one of the ladies said to me ‘did I fancy doing Race for Life’. I’d never run in my life but I said ‘yeah, it’s a challenge, it don’t look hard, so we’ll have a go at it’. So we did, it was 2010 and I did it in 45 minutes. One of the parents we sat with was a keen runner and had signed up and done the Windemere marathon – he said ‘you’ll have to do a 10k next’ I laughed and said, ‘what, that’s six miles! I’m tired driving that..’ This fellah said he’d done the Windermere marathon but the one he was hoping to do was the London marathon’. Well, I’d seen that. I’d watched it on telly and though ‘I’d like to do that’. He said I’d have to enter the ballot – I was up early one morning and decided I was going to enter. I entered and, lo and behold, I got a place. Now this was 2013 and, bear in mind I was the fat lass who didn’t run. But I told Gary I was going to do it and he said ‘yes, you are. Because that’s your mindset. You’ll just dig deep and you’ll do it’.

I had this little mile and a quarter route and I was doing about a 15 minute mile and I thought, ‘I’m going to smash this marathon’ No training plan and nothing in my mind.  At the beginning of 2014 (bearing in mind the marathon was in April) I was still not getting above this 15 minute mile and, unfortunately, my sister-in-law had got breast cancer and wasn’t doing well. By the time it was coming up to the marathon she was given weeks to live so I decided to defer until 2015. In the mean-time Martin Firth had posted something on Facebook asking if anyone wanted to join a running club (which turned out to be QRC), so I put my name down. I though the training runs would get me ready for 2015. Now, there’s a certain date in June that you have to confirm your place and I had it in my head that it was before 6 o’clock that you had to confirm it. I sat down at 5.30, and I can’t believe my luck – bearing in mind marathon places are like rocking horse droppings – I logged on and it said ‘sorry – you’re too late’. It was 5 o’clock not 6… I was gutted but I was a year into the running club and was quite enjoying it. Great atmosphere so I thought carry on. And I entered the ballot again. And again. And in 2017 I got a place and I thought this is brilliant – off we go. I know lots of people enter year after year and get nothing but lightning struck twice for me. Sadly, history repeated itself and Gary passed away in the February so I definitely wasn’t ready for 2018. Again, I deferred my place but I made a note of the time this time! So, I was doing it in 2019 but didn’t want anyone to know I was doing this marathon. You probably know the story after that: I trained in secret with Jo (Punt) and Angela (Waddington) and told everybody after I’d done it.

JS – we saw the posts on Facebook! There were some choice words – blooming heck, and so on…

My next question was going to be how did you get involved with QRC but you’ve answered that. You spotted Martin’s Facebook post. I also have the question of ‘do you have a favourite or memorable run’ but I think I know what the answer will be! 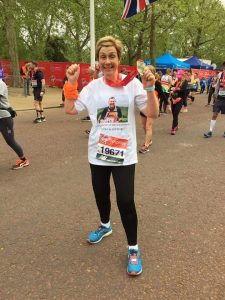 BM -It is the London marathon because it’s one of those bucket list things. But, what I really used to enjoy and I wish they’d resurrect it again, is the Overgate 10k. I used to really like that. You’d start at Trinity School, a lovely run through Bradshaw, right up to Raggalds, up Perseverance, all the way back down through Bradshaw and back to the school. It was challenging but it was local and there was lovely scenery. Plenty of the running club used to do it. I was first going to do it in 2015 but came down with a cold just before. So, me and Gary turned up, both with colds, so got there and decided to marshal.

JS – Have you got any running ambitions?

Ambitions? To get back in G12?  I don’t know, I think I just enjoy making up as I go along and meeting new people – see what comes out of life?

As you know, I run in G13, the slowest group there is and I think in my head I’m still that fat lass who can’t run and to a certain degree I still am. But I think I could do more if I had the confidence – I’ve made two guest appearances in G12 but decided I wasn’t ready. This year has been a massive change for me – another stage in the bereavement process – because Matthew has gone off to University and I’m completely on my own. I’ve moved house but I thought I can’t just sit here and rot so I’ve got a few races lined up this year and the main one is the half-marathon in Manchester, in May.  I’ve got all my little group on board with it (Jo, Angela, Helen and Katie) and we’re all training for it together. They’ve all had their own set backs but we’re getting on with it. I’ve got a couple of Race for Lifes again, a 7-mile race on the canal in May – which is part of the training plan – and the Bradford 10k.  So, my next ambition is to do the half-marathon and then just carry on and see what life brings.

JS – Do you ever fundraise for charity? You’ve spoken about Race for Life?

BM – I always like to do Overgate. Again, going back to the London marathon, people asked didn’t I do it for charity? So, what I decided to do was, I still had Gary’s JustGiving page so I said that if anyone feels like they want to do something, pay to Gary’s page and it goes to Overgate. So I always get drawn back to them. It’s local and I had the page. In fact, the first thing I did after the marathon was pay a pound a mile, £26.20, and then, obviously, other money. But that is the main one I like to do.

JS – Do you enjoy volunteering as well as running?

BM – I do, I get a real sense of achievement out of that. I’ve volunteered at parkrun a few times – and Matthew did too, as part of his Duke of Edinburgh – and I enjoy doing the winter league for the club. But I love cheering runners on and seeing people achieve their best. I love the sense of contributing. I think its brilliant.

JS – Who do you most enjoy running with? 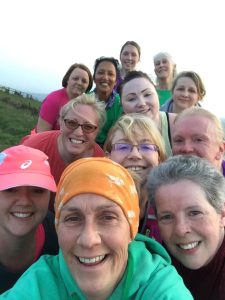 BM – Obviously, the club as a whole because I’ve met some absolutely fabulous people there, but I do love my little group that I’m with now. Jo, Angela, Katie and Helen. We’re all friends and they stick with me through thick and thin. Halifax parkrun have been amazing since Gary died. But the club – running is a community all of its own, there’s support at every level. I don’t find it clannish so I think that’s great.

JS – Do you have any particular nutrition tips as part of your training plan?

BM – Well, I’ve lost three stone since I started – I’ve run as a fat runner and a thin one – so I know what works for me. I think, being a lady of a certain age, we have to watch what we eat. One of the best, beneficial foods for me is beetroot – and I hate the stuff! It tastes like mud. I am quite into the nutritional content of food and there’s something in beetroot that helps your muscles and your nerve function so I made this beetroot smoothie. I put in whole beetroot, a banana, apple juice and a bit of ginger (to take away the taste!) and tried it. Ewww – but I got a PB at parkrun! I always find, if I have the beetroot, I run better. One of the other things, for my marathon, is Rich Tea biscuits.

JS – That prompts my final question. What’s your favourite biscuit?

If I’m not training I’ll have your Extremely Chocolatey Marks & Spencer Belgian stuff. More chocolate than biscuit. But for races I like Rich Tea. They’ve got that sweetness but they’re not full of fibre and keep you going.

I always have a banana too because you’ve got potassium which is good for your muscles. I have a banana for breakfast every day. That gives me the energy to keep going for a parkrun, or whatever. And a black coffee

Thank you to Bev, for a lovely long chat (with tea and biscuits….) and I hope to be setting up the next interview soon – suggestions for who I should speak to are always welcome 🙂