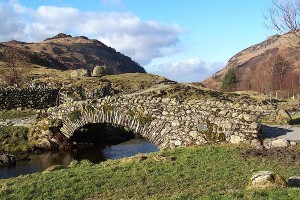 This was only my second visit to the Lake District so it was an adventure to arrive and be ready for the start on the north west side of Derwent Water.  Reassuringly familiar faces and vests appeared as we gathered at the lakeside and the race began comfortably enough with a few miles of steady running next to the water on soft tracks shadowed by woods.  This was not to last as the route offered very varied terrain.  The next section to the south of the lake featured tough climbs with rocky stepped descents to follow and a long run to the finish on narrow paths cut into the steep Eastern banks.  I’d underestimated the difficulties of the second half of the race and was overtaken by a number of runners, but held on to win the F50 category in spite of a strong late challenge.  So my visit ended very happily and I felt that I’d made friends.  I’d been able to run in the Lake District on a marked route, but going home in the train those huge fells still seemed as distant as if they’d been photographs.