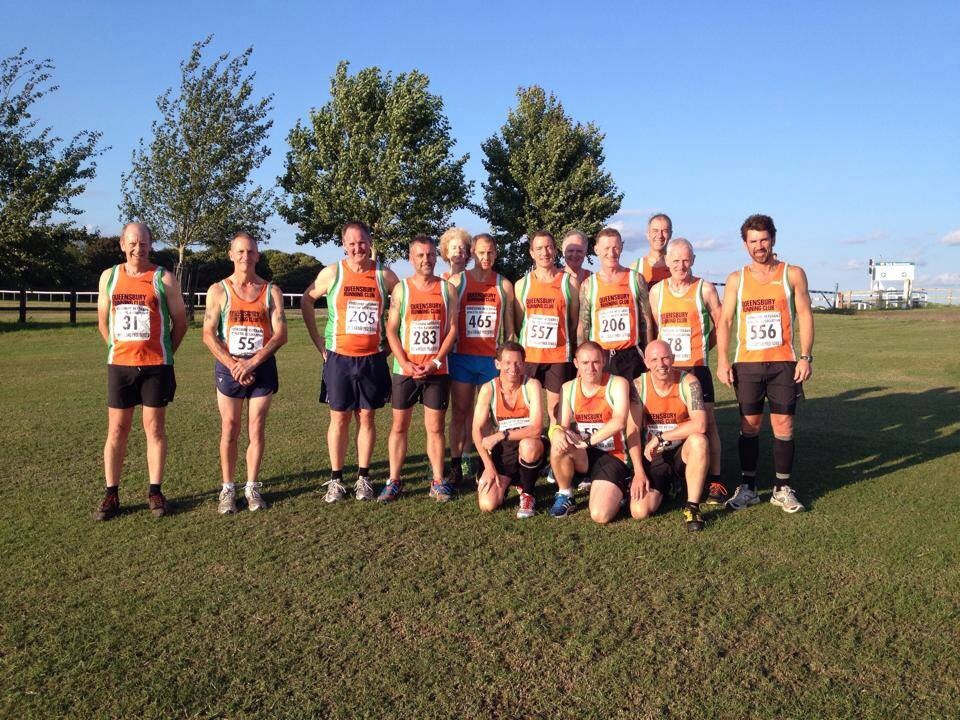 Crossgates & Knavesmire Yorkshire Vets races have taken place over the last week. Some excellent results for Queensbury and big turnouts have helped keep Queensbury high in the tables, both as individuals and as a club. Possibly most impressive is that Queensbury are 4th place in the mens All To Count table, when competing much larger clubs. Queensbury are also holding onto 3rd spot in the First 4 To Count table, just holding off Horsforth Harriers. Full results for the two races can be found on the YVAA website: http://www.yvaa.org/

Anybody in the Beginners and Intermediate groups are more than welcome to come and join in the YVAA Series and run for and score points for Queensbury. You need to register on the YVAA website where you will be given a number that you keep for each race. Everyone who runs for Queensbury scores important points for the club and they are really good, well organised races.

Team picture from Peter May

Last Wednesday was the YVAA race at Knavesmire. A flat and dry course proved to be a very fast paced 5.8 mile race starting from York Race Course. A strong turn out from Queensbury coupled with some great runs saw the club regain 3rd place in the 1st 4 to count competition. 13 QRC runners took part, Anna Smith, 3rd in category & Cathrine Robinson in the ladies race. Darren Midgley beat rival Allan Dodds of Roundhay Runners by one position to ensure the battle in the M35 category goes down to the last race with both tied on equal points going into the race at Spenborough. Peter Huges, Carl Heron & Mick Coe completed the first four. Phil Robinson & Karl Chamberlain were again close, with Phil just 12 seconds ahead of Karl. Graham Jowett was next in followed by an appearance from recently retired chairman of the club, Steve Jones. Andrew Tempest-Mitchell and Steve Wilby completed the team along with non-counting Chris Williams.

Great to have so many club runners out, especially on a Wednesday night and in particular to see Steve Jones in his now local race.

The revived West Yorkshire 5, put on jointly by Bradford-Airedale AC & West Yorkshire Fire Service was on Sunday. The race has been missing from the Calendar for the last 5 years but has a long history dating back 40 years. An undulating 5 mile course, starting & finishing at the Fire Service HQ in Birkenshaw. The wind proved to make the race very tactical at the front with runners jostling for position all the way to the 4 mile marker before Willy Smith of KCAC pulled away once the wind was behind him to take the victory. Chris Williams battled on for 3rd place just behind Peter Hopson of Bradford-Airedale who took 2nd. Martin Firth was following close behind and finished 10th overall.