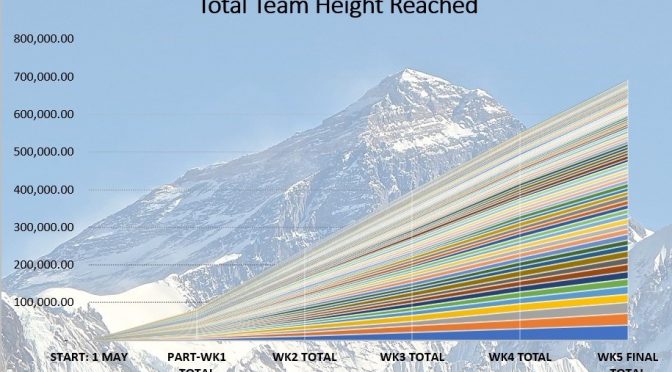 The members of Queensbury Running Club have run, climbed and powered upwards to complete their May challenge of climbing the equivalent of 10 Everests, smashing through the initial goal, and the extended milestone, to complete 23.9 mountainous climbs over 31 days.

The Running Club, which proudly boasts that it’s “the highest running club in England, probably” certainly had plenty of opportunity to tackle the height with many challenging hills within Queensbury and the local areas.

With ninety-five members contributing to the incredible achievement, 694,278 feet of elevation were completed in May and saw three members – Andy Smith, Julie Hepworth and Matt Fielding – climbing their own personal Everests, with Andy coming out on top with an impressive solo climb of 43,020feet, or almost 1.5 climbs of the world’s highest mountain.

There was even support from family members in raising money. Sam Hipwell, son of two QRC members, also completed his own marathon during the time, which though not included in the members-only elevation figure, helped bring in some extra charity funds.

There were further statistics pulled out of the data by club member and chief statistician Rob Glover, with four members climbing higher than Kilimanjaro during the month of May; three mastering the equivalent of Mont Blanc; and a further three ruling over Mount Rainier. Drawing on his personal love of all things space, currently a hot topic, Rob worked out that the expended energy of the Queensbury Running Club over the month was the equivalent of being able to accelerate a human up to Mach 6, or enough to send a 2kg sack of potatoes to the moon!

The challenge, which comes as the running club has had to postpone its regular Thursday night meetings, away parkruns and other group gatherings due to the ongoing COVID-19 situation, was set-up by members Julie Hepworth and Joanne Fortune to inspire the members in this down time and to raise money. The members were polled on who to support and they chose to help raise money for local hospice Sue Ryder Manorlands. At the time of writing the running group’s members and supporters have raised £2,785 for the charity, beating their initial target of £1000 and their extended goal of £2,500.

Julie Hepworth:
“In late April Joanne Fortune and I decided that we wanted to do something to help those affected by the Coronavirus Pandemic. Those that know me, know that I am partial to the odd hill or two during my runs!

“My logic was that if 50% of members ran up 5,000ft during May (plus a little bit more!), we should be OK.  I never imagined that we’d be doubling our challenge only 12 days into our target.

“All of these efforts were for the wonderful local charity, Manorlands Hospice.  I’ve been in awe and inspired by the personal challenges that everyone has set themselves, pushing themselves out of their comfort zones, tacking hills that they’d otherwise avoid.  Watching how our membership has achieved something so magnificent has been nothing short of spectacular.”

Further support in the challenge came from Tom Collinge, who created a list of the steepest hills in Queensbury for members to tackle; and Jane Glover who managed the fundraising side.

You can find out more about Queensbury Running Club, and how to become a member, by visiting our website. You can still donate to the challenge at justgiving.com/fundraising/qrc10everests.