The first West Yorkshire Winter League was help on a tough, hilly course in Mirfield. Some excellent performances from Jo Choran who was 12th lady overall in a very competitive field, and from Andy Dovoner & Diane Simpson on the début in the series.

The Gathering Winter Fools Relay was held last Saturday in icy conditions. Queensbury ‘Rams’ took the 1st place mixed team and 6th overall on the 35 mile off road loop starting and finishing in Keighley. Queensbury ‘Ewes’ provided a second entry, the first time the club has managed to enter two teams into a relay.

Pete Hughesm after running leg 1 on Saturday in the GWF Relay, went on to race in the Mytholmroyd Fell Race and celebrated turning 60 with a win for category! There’ll’ be a lot of relived V55’s celebrating his 60th birthday for him!

[important]Excellent photos of the GWF Relay Leg 1 and of Mytholmroyd Fell Race are available on the Woodentops Webiste: http://www.woodentops.org.uk/index.php?topic=home&subtopic=morephotos[/important]

Saturday was Bingley Harriers famous Harriers V. Cyclists race, a 6 mile fell race up over Baildon Moor contested by both runners and cyclists. The course is evenly balanced for both as the cyclists have a tough time getting the bikes up the big, muddy hills but then have to take advantage on the rideable and downhill sections…. easier said than done as Ben Clare, one of our runners found out by competing on his bike this year. Just staying on the bike proved difficult, never mind racing it down hill and then hauling it back up the next climb! Excellent runs from Chris Williams, Martin Firth & Mick Coe and a top ride from Ben on the bike made it a good show for the club. Nice to have the support out on the course too from other club members and family

Excellent pictures from Woodentops can be found here: http://www.woodentops.org.uk/index.php?topic=home&subtopic=morephotos

Leeds Abbey Dash 10k was run on Sunday. The race attracts the top road runners from all over the North of England as well as thousands of club and fun runners. Famous for being a flat and fast course, the race is a great one from targeting a PB. Richard Brook continued his show of good form finishing in 42:36, also excellent performance from Maria Rhodes in her first 10k – 53:49. Darren Jack also ran for Queensbury, finishing in 58:49.

Esk Valley Fell Club host some great races on the North Yorkshire Moors. The Gisborough Three Tops fell race was put on by them this weekend and is a race which has become a favourite within the club, not least for its accent and descent of Roseberry Topping. Mick, Pete, Anna & Chris Rushworth all made the trip up to take part this time around with both Pete and Anna winning their age categories meaning they brought back a boot full of wine too! Perhaps this is why it’s become a favourite!

Chris Williams ran in the Guy Fawkes 10 on the same day, an undulating 10 mile route starting in the picturesque Ripley,  finishing 5th and happily breaking the hour barrier by 4 seconds!

Queensbury were also represented well in the 5k held on the local Great Northern Trail, put on by Thornton Recreation Centre

Richard Brook ran in the Scarborough 10k on Sunday, completing in 44:10

The Withins Skyline Fell Race, first of the Airedale Athletics Winter League races also took part on Sunday from Penistone Hill, Haworth. Fine conditions prevailed for this 6.5 mile race over the moors. Chris Williams was first back for Queensbury in 9th place overall, Pete Hughes followed in 53rd in a time of 53:53! Mick Coe was next along with Anna Smith (2nd LV50) and Chris Rushworth, who amazingly managed to get around the wet and slippy moors in his road shoes! The are some excellent photos as always on the Woodentops website

Big congratulations to Andy Stott for his run in the Yorkshire Marathon. Coming in under his target time of 4 hours at 3:57:26. Great pacing and dedication in his training!

Carl represented the club in Germany at the weekend joining 550 runners in the Lubeck 10K. The centre of Lubeck is a World Heritage Site and the amazing sights on a sunny day were very welcome. The organisers describe the course as undulating but in Queensbury we would call it flat. Carl was 31st overall and 2nd M50 in 38.43 beating his personal best set several years ago at the (flat) Bradford 10K. Great fun, a silver medal and certificate presented on stage and free beer – it took a few moments to realise that it was alcohol-free…… 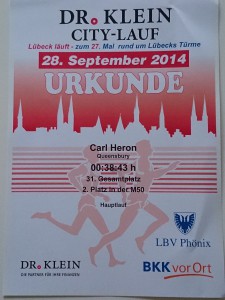 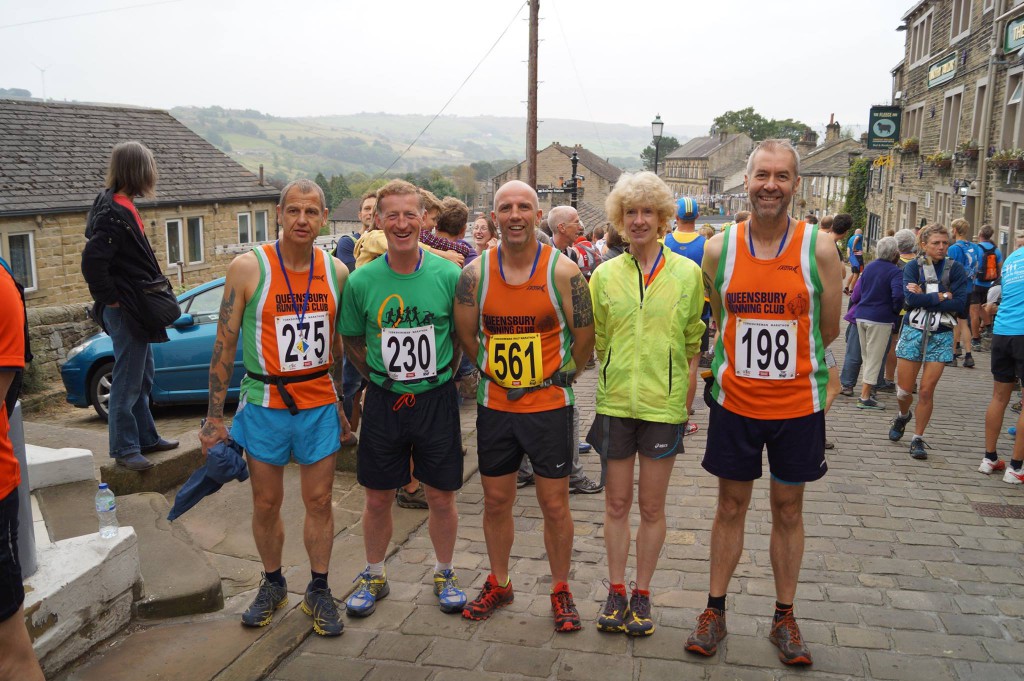 Ben Clare battled through injury to compete in The Ben Nevis Race on September 6th. A race straight up and back down Britain’s highest peak. Taking a time of 2:18:10 and finishing 197th from just short of 500 runners

There were three Queensbury members running for Airedale Athletics in the Leeds Country Way Relay and Anna Smith was running second claim for Baildon in their mixed team. The race is a 65 mile loop around Leeds, consisting of 6 pairs of runners doing legs between 9.5 & 12 miles each. Much like the Calderdale way relay, only flatter! Overall Airedale finished 3rd, 7 minutes behind eventual winners Valley Striders in a battle between Valley, Airedale & Abbey Runners which lasted throughout the day. Here’s a brief summary of Airedale’s race from team captain Will Kerr

A solid start from Quentin Lewis and Simon Pass on leg one put us in 2nd just a minute behind Valley and arguablly there best pairing on the relay. We were also a minute clear of the next team.Onto leg 2 with Marcin and Gerard. Unfortunately we slipped back to 6th and lost some time but still had a good chance of recovering.Leg 3 saw Martin Firth and Pete Hughes take over and had possibly the best performance of the day as they were 2nd quickest on there leg overall and just missed out on the leg trophy by 14 seconds!! They also put Airedale back into 3rd. Martin and Pete would probably admit that over 5k, the majority of our team, if not ALL, could beat these guys over the distance. However, when it comes to the off road relays, despite there ages, they show that they have the experience and knowledge of how to pace a race.So me and Matt Nowell took over on leg 4, about 5 minutes behind Valleys pairing of Gwilym Thomas and Paul Kaiser and 2 minutes behind Abbeys pairing which included Matt John. At Golden acre we were still in 3rd but had closed the gap to within 1 minute 41 behind Valley and 43 seconds behind Abbey.  The P&B pairing of Colin Walker and Neil Armitage then rocked up in 4th, 12 minutes behind us. We knew that the winning team would come from one of the teams currently hosting the top 3 positions!!Chris Dove and Martin Fillingham made a good start on leg 5 and by 5 miles had got within 100m of 2nd and the leaders werent to far in front of that. Unfortunately i think it was a step to far as the pace then slowed down a little.Pete Hopson and Chris Williams took over on leg 6 and with 2 miles to go and had put us in 2nd and just 2mins 30 behind Valley. They were also odds on favourites to scoop the fastest leg trophy. Unfortunately, one wrong turn later saw us finish 3rd and roughly 7 minutes back on Valley. Good running by all. Better luck next year! (my new motto!)