This race, the 2nd in the winter off road series featured more than 6.7 miles with over 1000ft of climbing, congrats to all who ran especially to Queensbury’s runners.

A sunny Sunday morning wasn’t necessarily what the runners wanted, but for the spectators it was no doubt a glorious mornings racing.

This years annual event took place on PECO turf over in Beckett Park, Leeds featuring the cream of the crop from our WYWL teams verses the equivalent of the PECO series. 6 teams of 3 runners made up the WYWL teams with male and female teams throughout the different age categories

The course of 2.7 miles with only 216ft of ascent meant some fast times were surely to be had, with Ton Collinge our only participant, running a blinding 2.7 mile in a mere 15:46 the quickest leg of the day. But even this could not prevent PECO from taking the honours with a 5_1 win.

Next race is Wednesday evening 7pm, the 2nd race of the series. 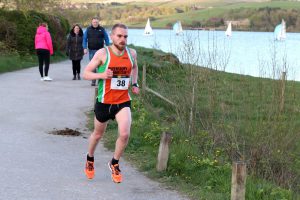 Epilepsy Action’s very own 10K, city centre road race through the heart of Bradford. Starting and finishing in Centenary Square, the event is a firm fixture in the local running diary and popular with beginners and those chasing a personal best. The event is highly rated for its organisation and PB potential.

After the original race was postponed due to the weather, the race got under way in fine running conditions, with an amazing turnout for Queensbury with 27 of you turning up on race day to try for the the all important PB or for some a chance to test their training over the 10k distance.

A flat course (apart from the short sharp incline within the 1st KM) leads runners from the start in Centenary Square and out onto Canal Road for approx 3.5 miles before returning into Centenary Square where cheering crowds await.

Well done to all who took part especially those achieving the all important PB. Full results by clicking the link below.

The Three Peaks Race traverses the famous Yorkshire Dales mountains of Pen-y-ghent, Ingleborough and Whernside is one of the oldest, most famous and best organised fell races in Britain.

First run in 1954, the Race covers 37.4 kilometres with 1608 metres of ascent and descent over the most rugged and spectacular countryside in the Yorkshire Dales National Park, taking competitors to a height of 723 metres above sea level.

The men’s course record is held by English international Andy Peace of Bingley Harriers, who completed this gruelling challenge in 2 hours 46 min. 03 sec in the 1996 race.

The women’s record of 3 hours 9 min 19 sec is held by English international Victoria Wilkinson in the 2017 race.

Chris Williams making his debut run at the event showed what a great talent and important member to QRC he really is, by his own admission Chris felt half fit in a recent Facebook post and could have probably gone quicker had his training gone to plan.

With the 1st 23 runners in the elite class, followed by 55 in the1st class, Chris romped home 17th in the 2nd class award category to finish a fantastic 96th overall in a super quick time of 3:43:31. A great performance on your 1st attempt a truly tough race.

Well done Chris and keep on inspiring runners throughout the club.

Full results and splits below

A record turnout for last nights Dick Hudson race. The rain held off, and the tops of Ilkley Moor were surprisingly drier than may have been expected considering all the rain recently. A 7 mile slog from Ilkley up over the moors to touch the gate at Dick Hudsons and return whichever way you wish.

This race was the 1st of the Summer Off Road Challenge series organised by Airedale Athletics. Well done to Mick, Simon and Stacey for taking part and representing QueensburyRC 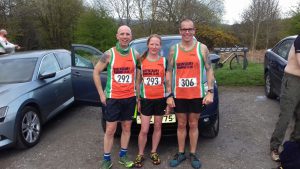 The next race is the Coiners on 7th May in Mythomroyd organised by CVFR. http://www.cvfr.co.uk/races/coiners/

The 38th running of the event saw a record breaking 50,000 runners cross the start line and possibly watched by thousands more road side and probably into the millions worldwide on TV.

The elites were at it again!!

Could Mo Farah break the British Marathon record of 2:08:16 set by Steve Jones in 1985? Could he possibly beat the fastest man in world over 26.2 miles, the incredible Eliud Kepochoge from Kenya? Alas, Farah finished in 3rd place, but managed to take the British record finishing in 2:06:21 (too slow Mo) maybe next time he should not throw his toys around in the water station.

In the women’s race, could Mary Keitany make it 3 wins in a row? Not this year, the Kenyans were here to party with 3 in the top 4, with Vivian Cheruiyot to take the win and 15th place overall in 2:18:31  leaving Paula Radcliffes 15 year old record intact, at least for another year.

Over with the masses and out on his own due to injuries to other QRC runners Ben Charlesworth took on the daunting task of running the streets of London. Ben achieved what he set out to do by raising money for his chosen charity.

Sustaining an injury early in the race Ben struggled and limped along determined not to let anybody down. Huge congratulations to Ben on what obviously was a difficult day, together with the race taking place in record breaking temperatures Ben did not let anybody down and I’m sure once the wounds have healed he’ll bet back to try again.

Ben finished in 5:57:13. Well done Ben a great achievement one that many will never achieve. 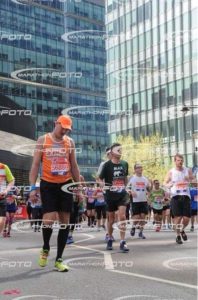 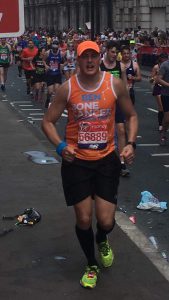 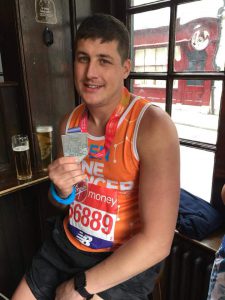 ‘Stormin’ Steve Brook and his well travelled Corsa headed over to Bolton for a 10k which I have run with him on several occasions.

Hosted by Bolton United Harriers the race is run around the undulating roads and within Leverhulme Park, with a grandstand finish in front of hundreds of cheering spectators, a great race and always well attended.

With the race winner finishing in 34:02, Steve ran well finishing in a nifty 53:39, 2nd in his age category. Well done Steve, great stuff.

A little spot of rain didn’t dampen the spirits of 242 runners as we descended on to Homfirth Harriers country for the opening round of the YVAA season. 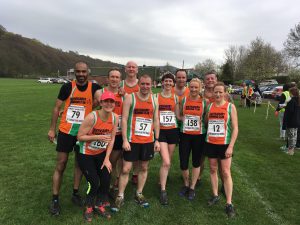 14 QRCers made the trip over to Honley, with the majority having a good run.

With a 2 lap opening circuit of the rugby pitch it was out at the far side of the field to the 1st of the climbs (which in my opinion went on for approximately 10 miles) through fields and dirt tracks passing Brockholes and upto Thustonland, a water station at half way offered refreshments, before the drop back towards the home of Holmfirth Harriers and a final lap of the field, where the early finishers cheered us slower runners in.

A couple of standout performances 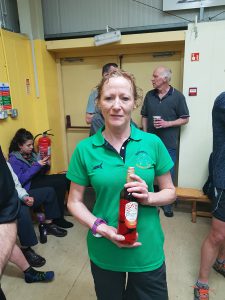 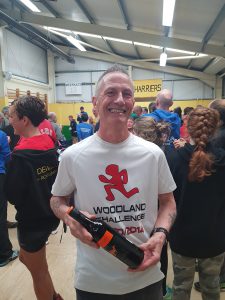 Awesome stuff guys, but we still need more female vets, so come on girls give these a go.

Full results by clicking below

Sorry for the late report Gary.

One of our newest members Gary Rollings took on the Manchester marathon a few weeks back.

Gary stormed round in a magnificent 3:02:14 just missing out on the sub 3 hour mark, but nonetheless a fantastic run from Gary, lets hope we can have more of the same from Gary wearing the orange and green of Queensbury