Carl Heron was racing for the 3rd time in a week at the Otley 10, an undulating 10 miler finishiing 81st 1:09:42. The winner was Nathaniel Williams in 55:34, with 8 runners breaking the 1 hour mark highlighting what a quality field the race attracts.

Anna Smith was the only Queensbury runner in the Borrowdale Trail race. A 21km trail race. Anna came out on top of a close run battle to win her age category, narrowly beating Henrietta Bolton Carter of Tweed Triathlon Club, in 2:09:41.

Glorious early summer weather (for a change!) greeted our Queensbury Beginners’ Running Group on the evening of Thursday June 12. After initial warm up exercises, all 24 were taken towards the top of Bradshaw Lane and Soil Hill for a second consecutive week of “gentle” hill work, in intermediate and beginner groups! Warm conditions made for a more exerting session, which was directed by Running Leader Martin, most ably assisted by Craig, Steve, Carl, Peter and Andy. We warmly welcomed RunEngland representative Holly Williams, without whom the Beginners’ Group would never have got off the ground – she hurried around at great speed taking action photos and video clips, and offering very timely encouragement – and conducted interviews of group members after training! Several runners commented on how useful the hill work was for the free weekly Saturday Lister Park park run!…apparently, Soil Hill made the park’s “teeny tiny hill” look as flat as a pancake!! What was most striking about the session was the VERY noticeable improvement in all our runners since last week’s session!! Well done to all of you!! 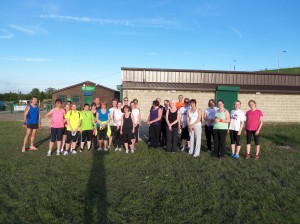 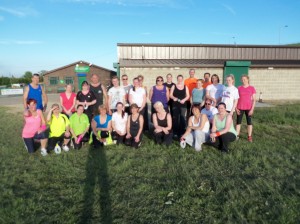 Well done to Craig Richardson ran a PB in the Edinburgh Marathon, he reports:

“I woke up on Sunday morning 25/5/14 and looked out of my hotel window, the weather was not what you can call the best for running a marathon, wet and cloudy.

After a breakfast of porridge and banana I set off for the start, a short bus ride saw me join the thousands of other runners competing in the marathon.

I must admit that on the way to the start my mind was not on the race and I felt a little disinterested, but once at the start the atmosphere changed everything, I was now looking forward to the race.

At 9:55 the race got underway to what was now clearing skies and no rain. The marathon course makes its way out of the city centre to the coast at Leith, then it follows the coast to the 17 mile point where it loops around the grounds of Gosforth House to join the coast road again and finish at Mussleborough.

I crossed the start line and felt in good form, as the miles passed I felt good. We hit the coast and there was a slight head on crosswind but nothing too hard to deal with. The 10K marker came and went and so did the half way, still felt good, making use of the water and energy stations really helped make sure I kept hydrated and carbs topped up.

I had a finish target of 3hrs 30mins which worked out at 8mins per mile, as we went through the 18 mile mark the sun came out and gave us perfect running conditions. A quick check of my watch gave me the info I wanted, still on for the 3:30:00.

Coming back down the coast towards Cockensie and Prestonpans the crosswind I was hoping would give us a slight push had dropped completely. Now coming up to 23 miles and I noticed my pace had dropped slightly and negative thoughts started to enter my head, but a quick telling off of myself soon got them out of my head.

Approaching the outskirts of Mussleborough and the crowds started to build, at one point the road became very narrow due to the amount of people watching.

Running past the race course we took a left turn and there was the finish line in site, this gave me an extra boost of energy and I headed for the line picking up more pace as I went.

The Edinburgh Marathon is really well organised with a great atmosphere, the locals come out in force to cheer you on. I would recommend Edinburgh to anyone looking for a PB or running a first marathon.”

Thursday saw the Full Bronte race, up in Haworth, it’s an undulating 5 mile road race, with two laps around Penistone Hill. Chris Williams’ fine form continued with a 2nd place, beaten by a strong late burst from Will Smith of host club Keighley & Craven. It was a tactical race with a good group of 6 or 7 runners vying to keep out of the strong wind hitting the front of the group, it wasn’t until the last 3/4 of a mile when the attacks started with Will Smith running clear of the group, Chris tried to hold onto him but had to settle for second. Carl Heron was next back for Queensbury in 37th (34:40) and Peter May finished 53rd (36:08) from 133 club runners.

Excellent photos can be found on the Woodentops site, click here

Carl Heron was back racing on Saturday in the Warfedale Off Road Half Marathon. Finishing this undulating off road half in 1:51:45 and coming home in 60th position. Mick Coe was hot on Carl’s heels, finishing just over a minute behind in 69th, 1:52:57 from over 350 runners.

Our extremely enthusiastic and talented Beginners’ Group had the rare pleasure of sunshine for the week 4 training session, on June 5!! The theme of the evening was “hill work”! Such has been the progress within the group, that, of the 28 who attended, one ran with the Queensbury Running Club weekly group of advanced runners, and a group of 8 were formed  into a fully supervised intermediate group – all with success! Running Leader Martin Firth and his assistants from the running club, were VERY impressed by the effort shown – and by the wonderful progress that has been evident since week 1! All were rewarded, after warming down exercises, with birthday sweets from Lynn Hill!…happy birthday, Lynn, from all at Queensbury Running Club!!

Thursday May 29th finally saw the mist lift from Queensbury after several days’ residence…much to the delight of our Beginners’ Group, for the Week 3 training session! We had another amazing turnout of 26 braves sampling the delights of Old Guy Road and part of Roper Lane, after an initial indoor warm up, for an out and back route of 10 minutes each way at the pace of one’s desires! There was incredible enthusiasm and endeavour shown once again, plus a great deal of improvement on show, too, since the course began!! Thank you to all for a super evening..and to Jo, Craig and Graham for assisting

For anyone who hasn’t seen this feature on the the beginners group, have a look here on the T & A website…

Last Thursday was the Apperly Bridge Canter, a new route, starting and finishing in the same place as the old one, due to works on the canal. Much more interesting than the last, with barely a flat stretch to mention in the 8.3k. Local teacher and Thames Hare & Hounds runner Phillip Tedd won in 28:35, followed by Queensbury’s Chris Williams in 2nd place with Leeds City’s Peter Branney 3rd. Ben Clare, still contending with injury niggles put in a fine performance and finished 58th in 35:19 and Richard Brook was 97th in 37:09 from 375 club runners.

Bank Holiday Monday was the Ilkley Trail Race. Queensbury’s Anna Smith was our only runner in this one, and took her category 1st place. Anna reports:

There was no shade from the bank holiday sun for runners in the Ilkley Trail Race circling the moor above Middleton Woods, but thankfully the 6.9m route passed a well-positioned water station twice.  Once back under the trees there were tree roots, mud and two-at-a-time steps on the downhill chase home.  The organisation and holiday atmosphere were great; thank you to Darren and others for the very welcome support. Anna Smith finished in 56:07 and was delighted to win the F50 category.

Kirkstall Vets race was the first in a flurry of mid-week races coming up over the summer months. Eight runners took part from Queensbury with Darren Midgely continuing his fine run of form with a 5th place finish. Pete Hughes came in to take his category win in 15th place, Mick Coe 31st and Carl Heron 43rd completed the mens first 4 to count team, putting Queensbury an impressive 3rd place and only 4 points off Stainland in 2nd, Pudsey are a clear 1st place. Andrew Stott closely followed in 48th, Peter May 61st, Graham Jowett 96th and Steve Wilby 129th completed the outfit for Queensbury. The next race in the series is Meanwood on June 24th.