It was an emotional day in Manchester as 40,000 runners and tens of thousands more spectators cheered them on as this year’s Great Manchester Race was held in spite of the terror attacks 1 week ago. 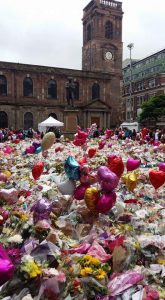 The authorities were determined that the huge annual event would go ahead despite Monday’s bombing, and Mancunians had been urged to flood into the city and get around the race route in huge numbers to show the world that Manchester is unbowed.

4 QRCers were amongst the 40000 runners who headed into Manchester to race in the 10k, all producing some fantastic results and I’m sure a lot of memories. Well done to all who showed the world that Manchester is not as divided as we may think.

WELL DONE TO YOU ALL, SUPER RUNNING.