Congratulations to Phil Robinson & Karl Chamberlain on becoming Ironmen. Both completed the gruelling Ironman event in Bolton on Sunday 20th July. For those unfamiliar with the event, it is a triathlon style event taken to the extreme, with it comprising a 2.4 mile open water swim, which was in Pennington Flash, near Leigh, a quick transition onto the bike to begin the 112m loop around Bolton and Greater Manchester followed by a marathon (26.2 miles) which took place around Bolton’s Reebok stadium and the town centre. Large crowds watched including a few friends from Queensbury.

Karl was first out of the water after the swim, taking 1:17:21, Phil 5 minutes adrift in 1:22:31. The first man out of the water took just less than 47 minutes, showing the quality of the elite competitors in the race. Karl’s first transition (7mins 40 secs) was marginally quicker than Phil’s (8:23) extending his lead by a few seconds. Once the bike ride was underway, Phil started closing the gap between the two and around 70km into the ride Phil went past Karl. Both keeping a good average pace for the entire 180km ride, they finished 35 minutes apart, Karl in 7hrs 21 seconds taking his total race time to 8:25:22 and Phil in 6:17:54 taking his total race time to 7:48:48. Another transition and the marathon began. Karl began clawing back the gap Phil had opened up on the bike, and with each time split closed the gap a little more. somewhere around 35km into the 42km run Karl finally caught Phil. Both carried on a consistent pace and finished the race with less than 20 minutes from a full days racing separating them. Karl came in at 12 hours 50 minutes 56 seconds and Phil at 13 hours 8 minutes and 45 seconds. Fantastic effort and achievement from both. Surely worthy of the hard training and commitment both have shown in the 4-5 months since they registered for the event. 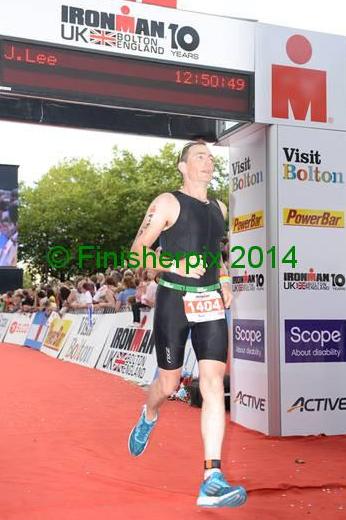