The most marathon world records for men and women have been set at the Berlin course, which is known for its flat profile, even surface, cheering spectators, and frequently mild autumn temperatures, last Sunday’s race was a damp affair meaning ideal running conditions.

This course was where Dennis Kimettoran ran a 2:02:57 three years ago. Only now the field included former marathon world record holder Wilson Kipsang (2:03:23, Berlin 2013), 5,000 and 10,000-metre world-record holder Kenenisa Bekele, and the incomparable Eliud Kipchoge. Kipchoge scored a commanding victory in the in 2016 Rio Olympic Marathon and then ran that astonishing 2:00:25 this May in Nike’s Breaking2 time-trial in Monza, Italy.

Not to be outdone by the elites, Queensbury’s own speed queen Lynne ‘the rocket’ Robinson stormed to a marathon PB in swift a 3:16:05. 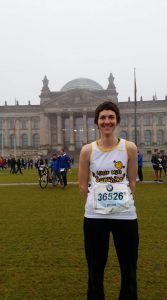